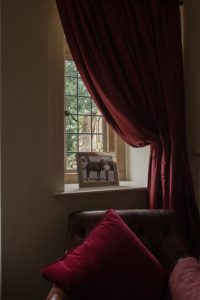 Windows that sit in a corner can sometimes be tricky to work with – poles can look too clunky and of course you can only fit a finial at one end.  The adjacent window in this study had a roman blind fitted but our client wished to avoid another roman blind. A pair of interlined curtains would have looked far too heavy but this silk curtain pulled to one side softens the hard edges of the window that abuts a wall. We used a gathered heading inserted into a pole , but an upholstered pelmet fitted over the heading, would be another alternative. 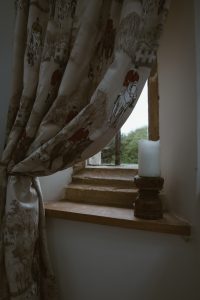 Similarly, the same client wanted to add some comfort to this bathroom . By adding this single interlined curtain, a touch of luxury was created on a very small window – as well as excluding draughts in a delightful but rather chilly bothy.